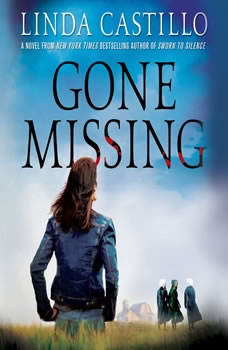 Linda Castillo's bestselling series has been called "gripping" [People] and "impossible to put down" [Bookpage] and the "teeth chattering suspense" [USA Today] continues with GONE MISSING—a deeply chilling novel about a rite of passage gone horribly wrong.Rumspringa is the time when Amish teens are allowed to experience life without the rules. It's an exciting time of personal discovery and growth before committing to the church. But when a young teen disappears without a trace, the carefree fun comes to an abrupt and sinister end, and fear spreads through the community like a contagion. A missing child is a nightmare to all parents, and never more so than in the Amish community, where family ties run deep. When the search for the presumed runaway turns up a dead body, the case quickly becomes a murder investigation. And chief of Police Kate Burkholder knows that in order to solve this case she will have to call upon everything she has to give not only as a cop, but as a woman whose own Amish roots run deep.Kate and state agent, John Tomasetti, delve into the lives of the missing teen and discover links to cold cases that may go back years. But will Kate piece together all the parts of this sinister puzzle in time to save the missing teen and the Amish community from a devastating fate? Or will she find herself locked in a fight to the death with a merciless killer?

The Dead Will Tell
by Linda Castillo

Everyone in Painters Mill knows the abandoned Hochstetler farm is haunted. But only a handful of the residents remember the terrible secrets lost in the muted/hushed whispers of time—and now death is stalking them, seemingly from the grave. On...

After the Storm
by Linda Castillo

In this electrifying thriller by New York Times bestseller Linda Castillo, Kate Burkholder must uncover a family's long-hidden past to solve a brutal murderWhen a tornado tears through Painters Mill and unearths human remains, Chief of Police Kate B...

Dust to Dust
by Tami Hoag

Sorry. The single word is written on a mirror. In front of it hangs a Minneapolis Internal Affairs cop. Was it suicide? Or a kinky act turned tragic?Either way, it wasn’t murder. At least not according to the powers that be. But veteran homici...

Police Sergeant Lou Boldt heads a special task force within Seattle’s Homicide bureau. His job: find and stop the Cross Killer, a twisted, perverse serial murderer who has eluded police for six months and paralyzed the city. But when a body wa...