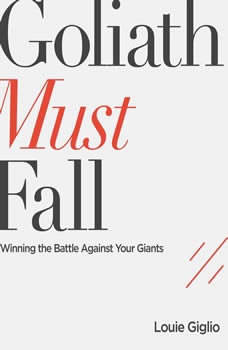 Goliath Must Fall: Winning the Battle Against Your Giants

It’s likely you have a threatening giant in your life…an adversary or stronghold that’s diminishing your ability to live a full and free life. Frozen in the grip of rejection, fear, anger, comfort, or addiction, we lose sight of the promise God has for our lives. Demoralized and defeated, we settle for far less than his best.

God has a better plan for you, a plan for you to live in victory. That’s why he has silenced your giant once and for all.

In Goliath Must Fall, pastor Louie Giglio uncovers a newfound twist in the classic story of David and Goliath. The key to living free from our giants is not better slingshot accuracy, but keeping our eyes on the one and only giant-slayer—Jesus. Put your hope in him and watch Goliath fall.