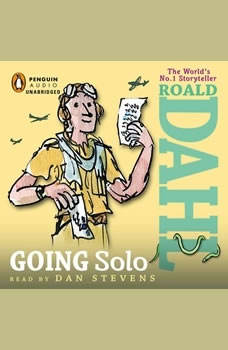 Going Solo is the action-packed tale of Roald Dahl's exploits as a World War II pilot. Learn all about his encounters with the enemy, his worldwide travels, the life-threatening injuries he sustained in a plane accident, and the rest of his sometimes bizarre, often unnerving, and always colorful adventures. Told with the same irresistible appeal that has made Roald Dahl one of the world's best-loved writers, Going Solo brings you directly into the action and into the mind of this fascinating man.

“Roald Dahl sometimes shared a tonal kinship with Ogden Nash, and he could demonstrate a verbal inventiveness nearly Seussian…[His] stories work better in audio than in print.” –The New York TimesWhere did Roald Dahl get all...

Caught by the Sea
by Gary Paulsen

Another such wave could easily be the end of us. I had to do something, fix something, save the boat, save myself.But what?Gary Paulsen takes listeners along on his maiden voyage, proving that ignorance can be bliss. Also really stupid and incredibl...

A New York Times bestseller and National Book Award winner Jacqueline Woodson, the acclaimed author of Another Brooklyn, tells the moving story of her childhood in mesmerizing verse.    Raised in South C...

Who Was Maurice Sendak?
by Janet Pascal

It seems entirely fitting that Maurice Sendak was born on the same day that Mickey Mouse first made his cartoon debut--June 10, 1928. Sendak was crazy about cartoons and comic books, and at twelve, after seeing Disney's Fantasia, he decided tha...

Jump Back, Paul
by Sally Derby

Who Was Dr. Seuss?
by Janet Pascal

Ted Geisel loved to doodle from the time he was a kid. He had an offbeat, fun-loving personality. He often threw dinner parties where guests wore outrageous hats! And he donned quirky hats when thinking up ideas for books-like his classic The Cat in...

This Star Won't Go Out
by Esther Earl

A collection of the journals, fiction, and letters of the late Esther Grace Earl, who passed away in 2010 at the age of 16. Essays by family and friends will help to tell Esther’s story along with an introduction by award-winning author John G...

Who Is Jeff Kinney?
by Patrick Kinney

Even as a kid, everyone thought Jeff Kinney was talented. People loved his drawings, and when he went to college, his comic strip Igdoof was so popular that it spread to other universities! Still, Jeff faced challenges. His cartoons were rejected by...

Who Was Roald Dahl?
by True Kelley

Roald Dahl is one of the most famous children's book authors ever. Now in this Who Was . . . ? biography, children will learn of his real-life adventures. A flying ace for the British Air Force, he was married to an Academy Award-winning a...