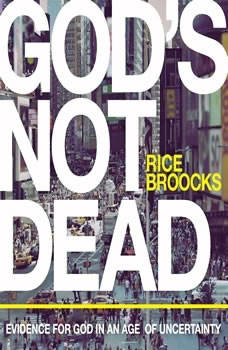 God's Not Dead: Evidence for God in an Age of Uncertainty

The Evidence Behind the Hit Movie

The goal of God’s Not Dead: Evidence for God in an Age of Uncertainty is straightforward: to help readers develop “a faith that is real and credible—and strong enough to help others find faith in God.” To that end, Rice Broocks outlines a roadmap that guides seekers to acknowledge the most basic truths of Christianity:

There is overwhelming and exciting evidence for God’s existenceThe God who exists is indeed the God of the BibleGod has revealed his nature through his Son, Jesus Christ

As shown during the movie, this is the original book on which the main character bases much of his debate points with the atheistic professor. Persuasive arguments crafted with tools borrowed from logic, science, and philosophy, as well as scripture, solidify the faith of the Christian reader and provide starting points for discussions with skeptics. With clear, easy-to-follow explanations of key concepts and controversies, God’s Not Dead is apologetics for the twenty-first century, presented in layman’s terms. Readers will be empowered not only to talk about their own faith with confidence but to lead others to a relationship with Jesus.