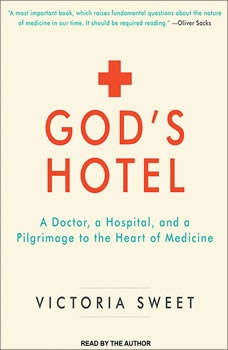 God's Hotel: A Doctor, a Hospital, and a Pilgrimage to the Heart of Medicine

San Francisco's Laguna Honda Hospital is the last almshouse in the country, a descendant of the hôtel-Dieu (God's hotel) that cared for the sick in the Middle Ages. Ballet dancers and rock musicians, professors and thieves—"anyone who had fallen, or, often, leapt, onto hard times" and needed extended medical care—ended up here. So did Victoria Sweet, who came for two months and stayed for twenty years. Laguna Honda, lower-tech but human-paced, gave Sweet the opportunity to practice a kind of attentive medicine that has almost vanished. Gradually, the place transformed the way she understood her work. Alongside the modern view of the body as a machine to be fixed, her extraordinary patients evoked an older idea of the body as a garden to be tended. God's Hotel tells their story and the story of the hospital itself, which, as efficiency experts, politicians, and architects descended, determined to turn it into a modern "health care facility," revealed its own surprising truths about the essence, cost, and value of caring for body and soul.