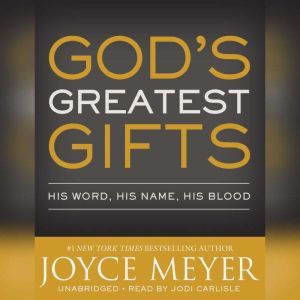 God's Greatest Gifts: His Word, His Name, His Blood

God has given you the weapons you need to keep Satan in his rightful place of defeat. Now more than ever, Satan is launching his most violent attacks against the children of God. But you are not defenseless against these attacks. God has provided you with powerful weapons to overcome every obstacle life presents. Joyce Meyer uncovers the keys of building a strong foundation in the Word of God. Through exploring Scriptural principles, she highlights how to assume God's authority to help you rise above challenges and understand the power you have through the blood of Jesus. God does not intend for you to spend all your time fighting the enemy. He wants you to enjoy a life of freedom and complete liberty. By using the principles outlined in this book, you will learn how to effectively use the weapons God has given you to live a victorious life!You will learn:How to be changed by the power of the WordHow to wield the weapon of the WordHow to exercise authority in the name of JesusThe power of the blood covenantWhy Satan is afraid of the blood of Jesus.Be an overcomer through claiming the power of GOD'S GREATEST GIFTS!