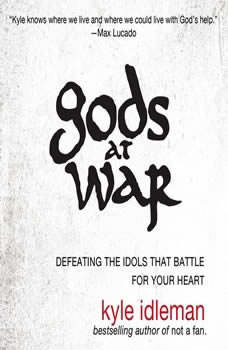 Gods at War: Defeating the Idols that Battle for Your Heart

In gods at war, Kyle Idleman, bestselling author of not a fan, helps every believer recognize there are false gods at war within each of us, and they battle for the place of glory and control in our lives. What keeps us from truly following Jesus is that our hearts are pursuing something or someone else.  While these pursuits may not be the a€œgraven imagesa€ of old, they are in fact modern day idols.  Behind the sin youa€™re struggling with, the discouragement youa€™re dealing with, the lack of purpose youa€™re living with is a false god that is winning the war for your heart.

According to Idleman, idolatry isna€™t an issuea€”it is the issue.

By asking insightful questions, Idleman reveals which false gods each of us are allowing on the throne of our lives.  What do you sacrifice for?  What makes you mad?  What do you worry about? Whose applause do you long for?  Wea€™re all wired for worship, but we often end up valuing and honoring the idols of money, sex, food, romance, success and many others that keep us from the intimate relationship with God that we desire.

Using true, powerful and honest testimonies of those who have struggled in each area, gods at war illustrates a clear path away from the heartache of our 21st century idolatry back to the heart of God a€“ enabling us to truly be completely committed followers of Jesus.