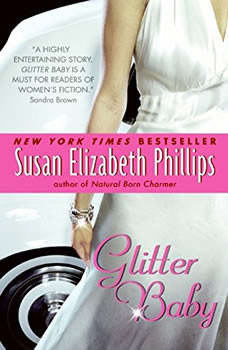 Welcome to the world of the Glitter BabyFleur Savagar is the most beautiful woman in the world . . . to everyone but herself. With her oversized hands and paddle-boat feet, her streaky blond hair and funny green eyes, she lives a life filled with secrets that began before she was born. That was when her bewitching mother left home to find James Dean and met Errol Flynn instead. Now Fleur has to grow up quickly, and life won't make that easy.Jake Koranda is both New York's most brilliant playwright and Hollywood's hottest actor. Difficult, talented, and tormented, he has no patience for international glamour girls, not even ones with beautiful bodies and smart-aleck mouths. But there's more to the Glitter Baby than shine, and Fleur's tougher than Jake expects. Even with the odds stacked against her, she's fiercely determined to discover the woman she's destined to be.An ugly duckling who can't believe she's turned into a swan . . . A tough-guy movie star with a haunted past . . . In a land of broken dreams, can two unlikely lovers trust their hearts?

If you are a fan of the usual SEP books, you should avoid this. I understand it was her first contemporary novel and it truly reeks. Pedophiles abound, along with a stage mom who will give you chills. Nice people? Not in this book at least not before I slammed the cover shut and quit reading. I'll find an old book or two to re-read while I wait for Booksfree to send a new batch. This made my stomach queasy.