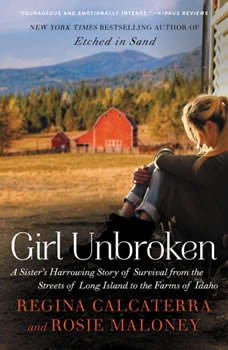 Girl Unbroken: A Sister's Harrowing Story of Survival from The Streets of Long Island to the Farms of Idaho

In the highly anticipated sequel to her New York Times bestseller Etched in Sand, Regina Calcaterra pairs with her youngest sister Rosie to tell Rosie’s harrowing, yet ultimately triumphant, story of childhood abuse and survival.They were five kids with five different fathers and an alcoholic mother who left them to fend for themselves for weeks at a time. Yet through it all they had each other. Rosie, the youngest, is fawned over and shielded by her older sister, Regina. Their mother, Cookie, blows in and out of their lives “like a hurricane, blind and uncaring to everything in her path.” But when Regina emancipates herself as a minor and escapes, her siblings are separated. And as Rosie discovers after Cookie kidnaps her from foster care, the one thing worse than being abandoned by her mother is living in Cookie’s presence. Beaten physically, abused emotionally, and forced to labor at the farm where Cookie settles in Idaho, Rosie refuses to give in. Like her sister Regina, Rosie has an unfathomable strength in the face of unimaginable hardship—enough to propel her out of Idaho and out of a nightmare.Filled with maturity and grace, Rosie’s memoir continues the compelling story begun in Etched in Sand—a shocking yet profoundly moving testament to sisterhood and indomitable courage.