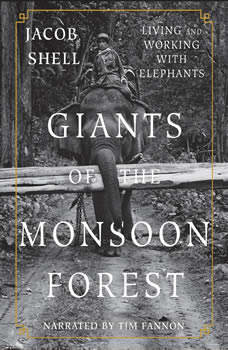 Giants of the Monsoon Forest: Living and Working with Elephants

"A journey through the hidden world of elephants and their riders. High in the mountainous rainforests of Burma and India grow some of the world's last stands of mature, wild teak. For more than a thousand years, people here have worked with elephants to log these otherwise impassable forests and move people and goods (often illicitly) under cover of the forest canopy. In Giants of the Monsoon Forest, geographer Jacob Shell takes us deep into this strange elephant country to explore the lives of these extraordinarily intelligent creatures. The relationship between elephant and rider is an intimate one that lasts for many decades. When an elephant is young, he or she is paired with a rider, who is called a mahout. The two might work together their entire lives. Though not bred to work with humans, these elephants can lift and carry logs, save people from mudslides, break logjams in raging rivers, and navigate dense mountain forests with passengers on their backs. Visiting tiny logging villages and forest camps, Shell describes fascinating characters, both elephant and human?like a heroic elephant named Maggie who saves dozens of British and Burmese refugees during World War II, and an elephant named Pak Chan who sneaks away from the Ho Chi Minh Trail to mate with a partner in a passing herd. We encounter an eloquent colonel in a rebel army in Burma's Kachin State, whose expertise is smuggling arms and valuable jade via elephant convoy, and several particularly smart elephants, including one who discovers, all on his own, how to use a wood branch as a kind of safety lock when lifting heavy teak logs. Giants of the Monsoon Forest offers a new perspective on animal intelligence and reveals an unexpected relationship between evolution in the natural world and political struggles in the human one. Shell examines why the complex tradition of working with elephants has endured with Asian elephants, but not with their counterparts in Africa. And he shows us how Asia's secret forest culture might offer a way to save the elephants. By performing rescues after major floods?as they did in the wake of the 2004 Indian Ocean tsunami?and helping sustainably log Asian forests, humans and elephants working together can help protect the fragile spaces they both need to survive."