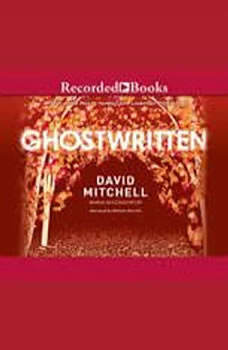 Oblivious to the bizarre ways in which their lives intersect, nine characters-a terrorist in Okinawa, a record-shop clerk in Tokyo, a money-laundering British financier in Hong Kong, an old woman running a tea shack in China, a transmigrating "noncorpum" entity seeking a human host in Mongolia, a gallery-attendant-cum-art-thief in Petersburg, a drummer in London, a female physicist in Ireland, and a radio deejay in New York-hurtle toward a shared destiny of astonishing impact. Like the book's one non-human narrator, Mitchell latches onto his host characters and invades their lives with parasitic precision, making Ghostwritten a sprawling and brilliant literary relief map of the modern world.