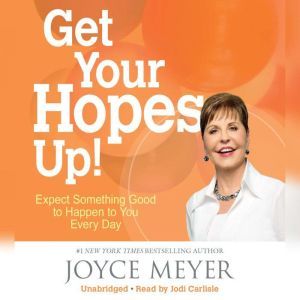 Get Your Hopes Up!: Expect Something Good to Happen to You Every Day

#1 New York Times bestselling author Joyce Meyer teaches listeners how to transform their lives by tapping into the power of hope. One of the most powerful forces in the universe is hope--the happy and confident anticipation that something good is going to happen. Regardless of where one is in life, it is impossible to live successfully and to the fullest without hope. With GET YOUR HOPES UP! Joyce will help listeners achieve a lasting sense of hope, built on their faith in God. Hope is only as strong as its source. This audiobook will help listeners avoid misplacing their trust in unreliable things, and help them ground their hope steadfastly in God for limitless joy and possibilities for their lives. As Joyce explains, "Without hope in God, there isn't much you can do, but with Hope in God, there isn't much you can't do."