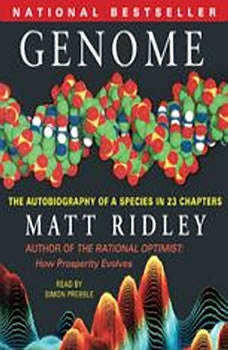 Genome: The Autobiography of a Species In 23 Chapters

The genome's been mapped.But what does it mean?Arguably the most significant scientific discovery of the new century, the mapping of the twenty-three pairs of chromosomes that make up the human genome raises almost as many questions as it answers. Questions that will profoundly impact the way we think about disease, about longevity, and about free will. Questions that will affect the rest of your life.Genome offers extraordinary insight into the ramifications of this incredible breakthrough. By picking one newly discovered gene from each pair of chromosomes and telling its story, Matt Ridley recounts the history of our species and its ancestors from the dawn of life to the brink of future medicine. From Huntington's disease to cancer, from the applications of gene therapy to the horrors of eugenics, Matt Ridley probes the scientific, philosophical, and moral issues arising as a result of the mapping of the genome. It will help you understand what this scientific milestone means for you, for your children, and for humankind.