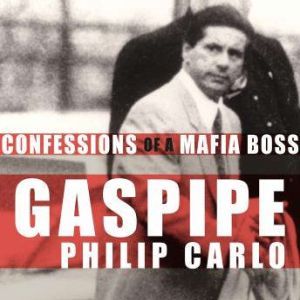 Gaspipe: Confessions of a Mafia Boss

Anthony "Gaspipe" Casso, the boss of New York's Lucchese crime family, was a Mafia superstar, responsible for more than fifty murders. Currently serving thirteen life sentences at a federal prison in Colorado, Casso has given journalist and New York Times bestselling author Philip Carlo the most intimate, personal look into the world of La Cosa Nostra ever seen. By pure happenstance, Casso had lived next door to the family of young Philip Carlo, who was able to get into the mind, heart, and soul of one of the most cunning, ruthless mob bosses in the annals of crime history. In Gaspipe, Casso reveals the shocking details behind headline-making crimes and crime figures, such as: —The mob's decision that John Gotti had to be taken out after whacking Big Paul Castellano without approval—and how Casso got the order to hit Gotti —A fly-on-the-wall view of the Mafia commission sit-down at which John Gotti was made capo di tutti capi, the boss of all bosses —The insidious relationship between La Cosa Nostra and the Russian Mafia, and how the Lucchese family murdered the most-feared assassin in the Russian mob —Details of secret sit-downs with mob bosses Vincent "The Chin" Gigante and John Gotti, and the notorious Sammy "The Bull" Gravano —How Gravano made fools of the U.S. Justice Department and the FBI —The real story of the Mafia Cops and the revelations of other law enforcement personnel on Casso's payroll —How the Mafia managed to get a tight stranglehold on most unions in America —The truth behind the Mafia's real role in bringing huge amounts of narcotics into the United States —How federal prison officials were bought and sold by the Mafia —The intimate details of the women behind the Mafiosi —The truth behind the assassinations of JFK and RFK —Who killed Jimmy Hoffa, and where his body is —Why J. Edgar Hoover protected the Mafia Chilling and illuminating, unvarnished and entertaining, Gaspipe is a roller-coaster ride into a world few outsiders have ever dared to enter.