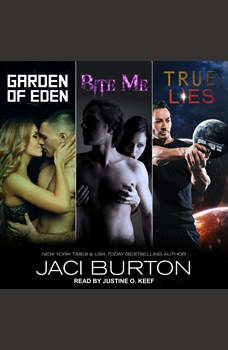 Garden of Eden: After a century of space sleep, Eden and a crew of humans are once again touching down on Earth-an Earth decimated by war and pollution. She must follow her now dead father's instructions and allow the alien Adam to make her planet new again. Eden finds this alien strange, but compelling and sexy. And if he can make her world whole again, she'll do anything, including using her body as his way to channel energy. She certainly has no complaints about the out of this world sex and the emotions he stirs within her. Bite Me: Gina Capelli is approaching thirty and still a virgin, a problem she's dying to eliminate. The problem is, between the few extra pounds she carries and her shyness around guys, dating has been kind of an issue. Gina finds that her luck may just change, though, when she meets the sexy star of Bite Me, the nighttime drama about vampires. True Lies: Mia Logan is a hypnotist with futuristic Earth's Alien Crime Enforcement Unit. Her specialty-hypnotizing suspects into confessing their crimes. Ric is a M'Loran who hunts down alien criminals. Ric and Mia are hot on the trail of Vad, a ruthless killer who has escaped his Earth prison. Contains mature themes.

Her Cold-Blooded Protector
by Lea Linnett