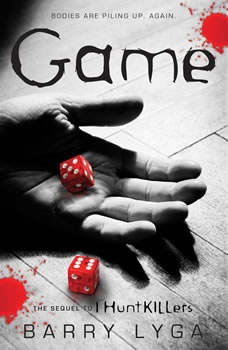 Game: The Sequel to "I Hunt Killers"

The second book in this thrilling, terrifying series by New York Times bestselling author Barry Lyga is perfect for fans of Dexter.Billy grinned. "Oh, New York," he whispered. "We're gonna have so much fun." I Hunt Killers introduced the world to Jazz, the son of history's most infamous serial killer, Billy Dent.In an effort to prove murder didn't run in the family, Jazz teamed with the police in the small town of Lobo's Nod to solve a deadly case. And now, when a determined New York City detective comes knocking on Jazz's door asking for help, he can't say no. The Hat-Dog Killer has the Big Apple--and its police force--running scared. So Jazz and his girlfriend, Connie, hop on a plane to the big city and get swept up in a killer's murderous game.Both the stakes and the body count are higher in this suspenseful and unstoppable sequel from acclaimed author Barry Lyga.

I Hunt Killers
by Barry Lyga