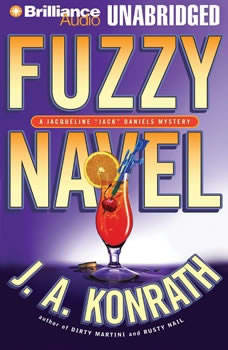 Things are going well for Lieutenant Jacqueline “Jack” Daniels of the Chicago Police Department. She has solved some of the city’s toughest and most high-profile homicides. Her personal life is finally in order. Her friends and family are safe and happy. And she just got a call that eased her mind like nothing else could: Alex Kork, one of the most dangerous criminals Jack ever arrested, killed herself while in jail. But things sour quickly when a group of vigilantes on a murderous spree decide to take down a cop and the people she cares about…and they turn downright awful when Jack discovers that Kork may not be dead after all. The next eight hours will be the worst of Jack’s life. And that’s saying something. Fuzzy Navel is perfect for listeners who like their mysteries with a shot of humor.“A particularly potent mix of equal parts mirth and mayhem with a dash of sex and a twist (or two) of plot...Konrath’s latest should be taken straight, no chaser needed.” –Publishers Weekly “A well-shaken mix of action, humor, suspense, and sharp dialogue.” –Newsday“A phenomenal thriller that never disappoints.” –Lloyd Woodall, Borders Group, Inc., Ann Arbor, Michigan“J.A. Konrath has done it again. I’ve read every book, and I still want more.” –Norman Goldman, Barnes & Noble, Encino, California

This is just kind of low humor, and the characters are totally one dimensional, the main character manages to get shot and beaten about 8 times in 24 hours and of course just keeps going. Just a little rediculous.

This series never dissapoints - the incredibly funny Harry McGlade really gets me laughing. This particular story was very good, throwing you in the middle of a hostage situation with everyone Jack loves, and her nemesis, Alex Kork. There were several surprise twists that left me sucker punched.