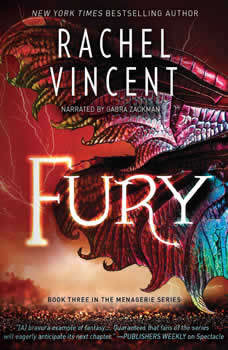 For fans of commercial urban fantasy like the popular Red Rising series by Pierce Brown, this is the astoundingly powerful finale of Rachel Vincent's Menagerie trilogy, where Delilah will uncover the truth about her mystical Furaie origins and discover her true purpose: to stop a second deadly war on humanity. Told through two intersecting timelines, the grand finale to Rachel Vincent's stunning Menagerie series will reveal the secret of how Delilah Marlow became a furiae just as she discovers what her true purpose is. In 1986, humanity experienced The Reaping- a nationwide slaughter of six-year-old children by their parents-one of the country's most horrific tragedies. What's even more terrifying: the revelation that the few six-year-old survivors of the country's greatest tragedy are now thought to have caused it.These aren't the children their families believed they were. In truth, they were fae changelings brought home from the hospital in place of the real babies they were exchanged for. From that day forward, the world would never trust another cryptid. For if the fae were capable of such dark evil, surely all cryptid creatures posed a danger to humanity. Now, Delilah Marlow and a rogue group of cryptids are on the run, having narrowly escaped the horrors of the Savage Spectacle, a private collection of "exotic wildlife" that specialized in ruthless cryptid cage matches, safari-style creature hunts and living party favors. As they travel in search of lost family members and cryptid friends, Delilah struggles with the difficulties of pregnancy, complicated by the bitter memory of how her child was conceived. Then one morning Delilah wakes up with dried blood all over her hands. Though she has no memory of it, she obviously went somewhere-and possibly killed someone-in her sleep. Soon, Delilah finds herself constantly pulled by the furiae, which she hasn't felt stir within her in quite a while, but who she has no choice but to follow. As she is compelled to act of the furiae's impulses, she's beginning to realize that something much bigger is at stake. There is something connecting her victims, something more than the usual injustice she kills them for-and perhaps something as dangerous as another Reaping.