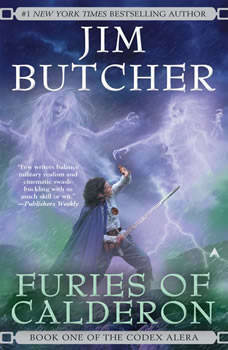 Furies of Calderon: Book One of the Codex Alera

In this extraordinary fantasy epic, the #1 New York Times bestselling author of the Dresden Files leads readers into a world where the fate of the realm rests on the shoulders of a boy with no power to call his own...

For a thousand years, the people of Alera have united against the aggressive and threatening races that inhabit the world, using their unique bond with the furies—elementals of earth, air, fire, water, wood, and metal. But in the remote Calderon Valley, the boy Tavi struggles with his lack of furycrafting. At fifteen, he has no wind fury to help him fly, no fire fury to light his lamps. Yet as the Alerans’ most savage enemy—the Marat horde—return to the Valley, Tavi’s courage and resourcefulness will be a power greater than any fury, one that could turn the tides of war...

Furies of Calderon: Book One of the...
Codex Alera #1