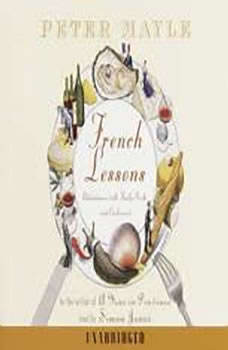 A delightful, delicious, and best-selling account of the gustatory pleasures to be found throughout France, from the beloved author of A Year in Provence.

The French celebrate food and drink more than any other people, and Peter Mayle shows us just how contagious their enthusiasm can be. We visit the Foire aux Escargots. We attend a truly French marathon, where the beverage of choice is Château Lafite-Rothschild rather than Gatorade. We search out the most pungent cheese in France, and eavesdrop on a heated debate on the perfect way to prepare an omelet. We even attend a Catholic mass in the village of Richerenches, a sacred event at which thanks are given for the aromatic, mysterious, and breathtakingly expensive black truffle. With Mayle as our charming guide, we come away satisfied (if a little hungry), and with a sudden desire to book a flight to France at once.

Swapping his native San Francisco for the City of Light, travel writer David Downie arrived in Paris in 1986 on a one-way ticket, his head full of romantic notions. Curiosity and the legs of a cross-country runner propelled him daily from an unheate...

Like so many others, David Lebovitz dreamed about living in Paris ever since he first visited the city in the 1980s. Finally, after a nearly two-decade career as a pastry chef and cookbook author, he moved to Paris to start a new life. Having cramme...

Andrew Zimmern, the host of The Travel Channel’s hit series Bizarre Foods, has an extraordinarily well-earned reputation for traveling far and wide to seek out and sample anything and everything that’s consumed as food globally, from cow...

The Road to Burgundy
by Ray Walker

Ray Walker had a secure career in finance until a wine-tasting vacation ignited a passion that he couldn't stifle. Ray neglected his work, spending hours poring over ancient French wine-making texts, learning the techniques and the language, and day...

Paris to the Pyrenees
by David Downie

Driven by curiosity, wanderlust, and health crises, David Downie and his wife set out from Paris to walk across France to the Pyrenees. Starting on the Rue Saint-Jacques then trekking 750 miles south to Roncesvalles, Spain, their eccentric route tak...

For many years, Saint-Germain-des-Pres has been a stronghold of sans culottes, a refuge to artists, a paradise for bohemians. It's where Marat printed L'Ami du Peuple and Thomas Paine wrote The Rights of Man. Napoleon, Hemingway, and Sartre have all...

A Year in the Merde
by Stephen Clarke

An urban antidote to A Year in Provence, Stephen Clarke's book is a laugh-out-loud account of a year in the life of an expat in Paris- for Francophiles and Francophobes alikeA YEAR IN THE MERDE is the almost-true account of the author's adventures a...

The Most Beautiful Walk in the World
by John Baxter

Thrust into the unlikely role of professional "literary walking tour" guide, an expat writer provides the most irresistibly witty and revealing tour of Paris in years. In this enchanting memoir, acclaimed author and long-time Paris resident John Ba...