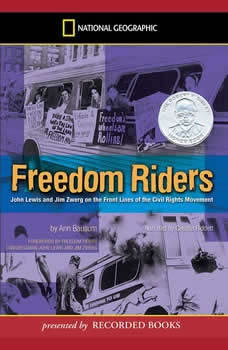 Freedom Riders: John Lewis and Jim Zwerg on the Front Lines of the Civil Rights Movement

It was 1961. John Lewis and Jim Zwerg are two young men boarding a bus and heading south for Montgomery, Alabama and the thick of the brewing Civil Rights struggle. They are idealists, committed to justice and equality and full of hope for change. This is their Freedom Ride. Arriving in town, suddenly they find themselves helpless in the clutches of an angry white mob armed with bats, chains, and hammers. Both men are beaten within an inch of their lives, for the color of their skin-John was black and Jim was white-and for the ideas they had traveled so far to support. Told from the perspectives of these two Freedom Riders, this Robert F. Silbert Honor Book is a stunning testament to the power of nonviolent resistance in the face of racial discrimination and segregation. A thoughtful reading from narrator Cecelia Riddett brings this important tale of the Civil Rights Movement to life for today's readers.

Balloons Over Broadway
by Melissa Sweet

Joseph Lemasolai Lekuton is a Maasai tribesman of Kenya. In this fascinating autobiography, he shares stories about growing up in his nomadic tribe-from licking sweat off cows' noses to survive a drought, to facing down a lion at age 14, to playing ...

The author of My Name Is Maria Isabel offers an inspiring look at her childhood in Cuba in this collection that includes Where the Flame Trees Bloom, Under the Royal Palms, five new stories, and more. These true autobiographical tales from renowned ...

Picture a Crow Indian elder, his wizened eyes catching yours in the ancient flicker of firelight. His mesmerizing stories span the ages, from Custer to World War II to the 21st Century. He is the last traditional chief of his people. He is over 90 y...

In 1955, Rosa Parks refused to give her bus seat to a white passenger in Montgomery, Alabama. This seemingly small act triggered civil rights protests across America and earned Rosa Parks the title "Mother of the Civil Rights Movement."

The Voice that Challenged a Nation
by Russell Freedman

Winner of the Robert F. Sibert Informational Book Award, The Voice That Challenged a Nation is an inspiring biography. In the 1930s, black singer Marian Anderson was not allowed to perform at Constitution Hall. But with help from Eleanor Roosevelt, ...

Laban Carrick Hill, the bestselling author of the National Book Award Finalist Harlem Stomp, here delivers an inspiring and lyrical story of a gifted craftsman who lived in South Carolina two centuries ago. Dave's superb artistry and the deeply obse...

Read the remarkable true story of a young boy's journey from civil war in east Africa to a refugee camp in Sudan, to a childhood on welfare in an affluent American suburb, and eventually to a full-tuition scholarship at Harvard University. Followin...