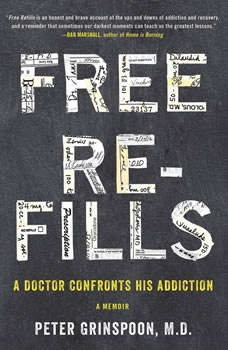 Free Refills is the harrowing tale of a Harvard-trained medical doctor run horribly amok through his addiction to prescription medication, and his recovery.Dr. Peter Grinspoon seemed to be a total success: a Harvard-educated M.D. with a thriving practice; married with two great kids and a gorgeous wife; a pillar of his community. But lurking beneath the thin veneer of having it all was an addict fueled on a daily boatload of prescription meds. When the police finally came calling--after a tip from a sharp-eyed pharmacist--Grinspoon's house of cards came tumbling down fast. His professional ego turned out to be an impediment to getting clean as he cycled through recovery to relapse, his reputation, family life, and lifestyle in ruins. What finally moves him to recover and reclaim life--including working with other physicians who themselves are addicts--makes for inspiring reading.