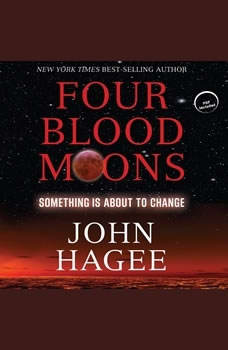 Four Blood Moons: Something Is About to Change

&#147;There will be signs in the sun, in the moon, and in the stars . . . Now when these things begin to happen, look up and lift up your heads, because your redemption draws near.&#8221;&#151;Luke 21:25a, 28It is rare that Scripture, science, and history align with each other, yet the last three series of Four Blood Moons have done exactly that. Are these the &#147;signs&#8221; that God refers to in His Word? If they are, what do they mean? What is their prophetic significance?In this riveting audio book, Pastor John Hagee explores the supernatural connection of certain celestial events to biblical prophecy &#151; and to the future of God&#8217;s chosen people and to the nations of the world.Just as in biblical times, God is controlling the sun, the moon, and the stars to send our generation a signal that something big is about to happen. The question is: Are we watching and listening for His message?