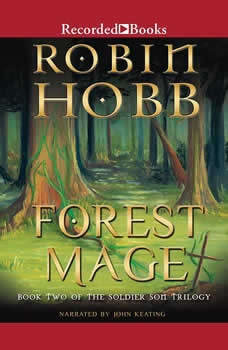 A luminary in SF literature, Robin Hobb continues her marvelous Soldier Son trilogy with part two, Forest Mage. Nevare Burvelle has survived major combat and is making a quick recovery from a disease plaguing his fellows in the King's army. He also believes he is free from the Speck magic that held him under its sway. Now traveling home to rendezvous with his fiancEe, Nevare suffers haunting visions and soon realizes that malicious magic still resides within him-and is intent on destroying everything he holds dear.