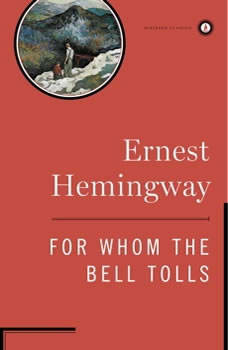 For Whom the Bell Tolls

Hemingway's classic novel of the Spanish Civil War In 1937 Ernest Hemingway traveled to Spain to cover the civil war; three years later he completed the greatest novel to emerge from "the good fight," For Whom the Bell Tolls. The story of Robert Jordan, a young American in the International Brigades, it tells of loyalty and courage, love and defeat, and the tragic death of an ideal. Surpassing his achievement in The Sun Also Rises and A Farewell to Arms, Hemingway creates a work at once rare and beautiful, strong and brutal, compassionate, moving and wise. "If the function of a writer is to reveal reality," Maxwell Perkins wrote to Hemingway after reading the manuscript, "no one ever so completely performed it." For Whom the Bell Tolls stands as one of the best war novels of all time. Ernest Hemingway did more to change the style of English prose than any other writer in the twentieth century, and for his efforts he was awarded the Nobel Prize for literature in 1954. Hemingway wrote in short, declarative sentences and was known for his tough, terse prose. Publication of The Sun Also Rises and A Farewell to Arms immediately established Ernest Hemingway as one of the greatest literary lights of the twentieth century. As part of the expatriate community in 1920s Paris, the former journalist and World War I ambulance driver began a career that lead to international fame. Hemingway was an aficionado of bullfighting and big-game hunting, and his main protagonists were always men and women of courage and conviction, who suffered unseen scars, both physical and emotional. He covered the Spanish Civil War, portraying it in fiction in his brilliant novel For Whom the Bell Tolls, and he subsequently covered World War II. His classic novella The Old Man and the Sea won the Pulitzer Prize in 1953. He died in 1961.

How do you review a Hemingway classic? I won't even try. Campbell Scott does an amazing job with the narration. Do yourself a favor and add this to your queue.