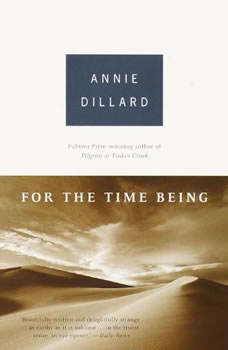 For the Time Being

From Annie Dillard, the Pulitzer Prizewinning author of Pilgrim at Tinker Creek and one of the most compelling writers of our time, comes For the Time Being, her most profound narrative to date. With her keen eye, penchant for paradox, and yearning for truth, Dillard renews our ability to discover wonder in lifes smallestand often darkestcorners. Why do we exist? Where did we come from? How can one person matter? Dillard searches for answers in a powerful array of images: pictures of birdheaded dwarfs in the standard reference of human birth defects; ten thousand terracotta figures fashioned for a Chinese emperor in place of the human court that might have followed him into death; the paleontologist and theologian Teilhard de Chardin crossing the Gobi Desert; the dizzying variety of clouds. Vivid, eloquent, and haunting, For the Time Being evokes no less than the terrifying grandeur of all that remains tantalizingly and troublingly beyond our understanding.