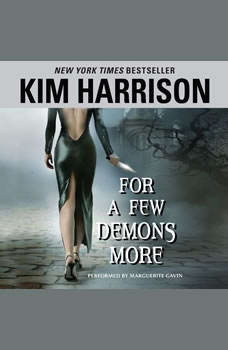 For a Few Demons More

Despite dating one vampire and living with another, Rachel Morgan has always managed to stay just ahead of trouble . . . until now.A fiendish serial killer stalks the Hollows, and no one living in or around Cincinnati—human, inhuman, or undead—is safe.An ancient artifact may be the key to stopping the murderer—a mysterious relic that is now in the hands of Rachel Morgan, fearless independent bounty hunter and reckless witch. But revealing it could ignite a battle to the death among the vast and varied local supernatural races.Rachel's been lucky so far. But even she can't hide from catastrophe forever.

First time in trade paperback: the fourth novel in the #1 New York Times bestselling series. Vampire hunter and zombie animator Anita Blake is an expert at sniffing out the bad from the good. But in The Lunatic Cafe-now in trade paperback for the f...

The early Anita Blake novels find new life in trade paperback-as perfect collectibles for long-time fans or as great ways for new readers to sink their teeth into the series.In The Laughing Corpse, a creature from beyond the grave is tearing a swath...

Ever since she discovered she's pregnant, Elena Michaels has been on edge. After all, she's never heard of another living female werewolf, let alone one who's given birth. But thankfully, her expertise is needed to retrieve a stolen letter allegedly...

With a rabid fan base that grows larger each day, the New York Times and USA Today best-selling Sookie Stackhouse mysteries by acclaimed author Charlaine Harris are not to be missed. Along with their phenomenal popularity, the books have also captiv...

For a Few Demons More
Hollows #5