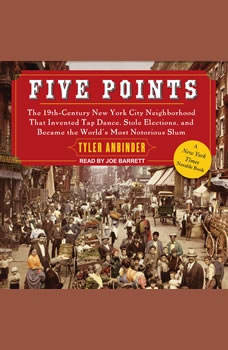 The very letters of the two words seem, as they are written, to redden with the blood-stains of unavenged crime. There is Murder in every syllable, and Want, Misery and Pestilence take startling form and crowd upon the imagination as the pen traces the words." So wrote a reporter about Five Points, the most infamous neighborhood in nineteenth-century America, the place where "slumming" was invented. All but forgotten today, Five Points was once renowned the world over. Its handful of streets in lower Manhattan featured America's most wretched poverty, shared by Irish, Jewish, German, Italian, Chinese, and African Americans. It was the scene of more riots, scams, saloons, brothels, and drunkenness than any other neighborhood in the new world. Yet it was also a font of creative energy, crammed full of cheap theaters and dance halls, prizefighters and machine politicians, and meeting halls for the political clubs that would come to dominate not just the city but an entire era in American politics. From Jacob Riis to Abraham Lincoln, Davy Crockett to Charles Dickens, Five Points both horrified and inspired everyone who saw it. The story that Anbinder tells is the classic tale of America's immigrant past, as successive waves of new arrivals fought for survival in a land that was as exciting as it was dangerous, as riotous as it was culturally rich. Tyler Anbinder offers the first-ever history of this now forgotten neighborhood, drawing on a wealth of research among letters and diaries, newspapers and bank records, police reports and archaeological digs. Beginning with the Irish potato-famine influx in the 1840s, and ending with the rise of Chinatown in the early twentieth century, he weaves unforgettable individual stories into a tapestry of tenements, work crews, leisure pursuits both licit and otherwise, and riots and political brawls that never seemed to let up. Although the intimate stories that fill Anbinder's narrative are heart-wrenching, they are perhaps not so shocking as they first appear. Almost all of us trace our roots to once humble stock. Five Points is, in short, a microcosm of America.