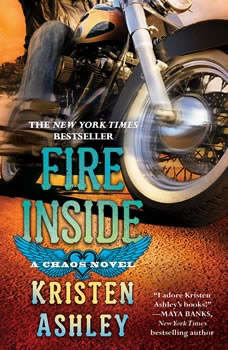 Fire Inside: A Chaos Novel

Meet the intense and sexy bad boy bikers of the Chaos Motorcycle Club in Lanie and Hop's story from Kristen Ashley's New York Times bestselling series."I adore Kristen Ashley's books. Her stories grab you by the throat from page one and . . . continue to dwell in your mind days after you've finished the story."-Maya Banks, New York Times bestselling authorLanie Heron isn't looking for love-no surprise, considering her last serious relationship nearly got her killed. So when Lanie propositions Hop Kincaid, all she wants is one wild night with the hot-as-hell biker who patrols with the Chaos Motorcycle Club . . . For Hop, Lanie has always been untouchable. She's too polished and too classy for his taste. But when she gives Hop the once-over with her bedroom eyes and offers him a night in paradise, he can't say no. And he doesn't regret it when he finds that Lanie is the best thing that's ever happened to him-in or out of bed. Now the trick will be to convince her of that.

The Gamble
by Kristen Ashley

Welcome to New York Times and USA Today bestselling author Kristen Ashley's Colorado Mountain Series, where friends become family and everyone deserves a second chance.Life isn't meant to be perfect. It's meant to be lived . . .Nina Sheridan though...

FIRST TIME IN PRINT!Get ready to ride . . . Tyra Masters has had enough drama to last a lifetime. Now, she's back on track and looking forward to her new, quiet life. Until she meets the man of her dreams. The tattooed, muscled biker plies her with...

Love is just around the corner . . . Sweet, shy Mara Hanover is in love with her neighbor. For four years, she has secretly watched her dream man from afar. Handsome police detective Mitch Lawson is way out of her league. She's a girl from the wron...

Fire Inside: A Chaos Novel
Chaos

Own the Wind
Chaos