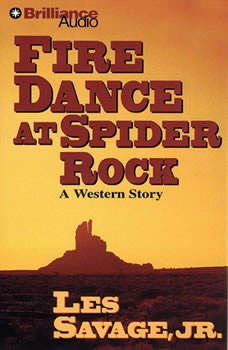 In the sooty blackness of a Tucson alley, Rim Fannin got word that twenty heavily guarded freight wagons were traveling by night toward Tubac. Still bitter over his father’s murder, Rim takes a job as a mule skinner with White Mountain Freight, suspecting its owner, John Romaine, of having a hand in his father’s death. He wasn’t very good with a mule whip but he managed until his train was attacked by Indians.Captured, he was taken to Canyon de Chelly where escape was hopeless. And late one night when the Bead Clan held a fire dance in the shadow of Spider Rock, Rim discovered why he had been taken alive....