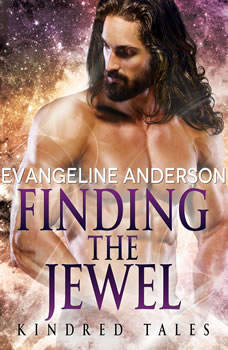 This is a Kindred Tales PLUS novel--95,000 words A warrior has a choice to make:  Rescue the woman he loves Or complete a quest to heal himself Which will he choose? You’ll have to read Finding the Jewel to find out Chloe Deems is a plus sized girl with pink hair and an attitude –she owns her curves. Which is one reason she’s so upset when she gets abducted by aliens and forced to live in a Smart House designed to make her lose weight. She has to weigh in every day and the smart-aleck talking scale decides what she’s allowed to eat which is always lettuce and celery and never the delicious Thin Mints she can see peering tantalizingly out from behind the unbreakable glass cupboard in the kitchen. To Chloe, it seems like things just can’t get any worse…until a prospective buyer comes to look her over. Tark is a Beast Kindred who has been on the outside looking in his whole life. A debilitating stutter has kept him from finding a mate or settling down. Finally he gets a prophesy from a priestess telling him to seek for an elusive jewel which can cure his voice and Tark knows just where to look for it—in the house where Chloe is being held prisoner. But instead of the jewel, he finds a feisty, gorgeous plus-sized girl who’s ready to fight for her life. He agrees to rescue her if she’ll help him look in the only other place the jewel might be—the Resort of Resonant Oneness, located deep underground on a planet that straddles the lines between dimensions.  Chloe agrees to help the big Kindred out in return for her freedom but she doesn’t know that the resort they are traveling to has some distinctly erotic ideas about “oneness.” Now she and the huge Beast Kindred are stuck doing some incredible embarrassing and intimate exercises that make even the brash Chloe blush. Still, she and Tark seem to be growing closer…until a monster from her past kidnaps Chloe.  Tark is given a choice—between rescuing the woman he has come to love, or completing the task he set himself in the first place and regaining his voice.  Which will he choose? You’ll have to read Finding the Jewel to find out