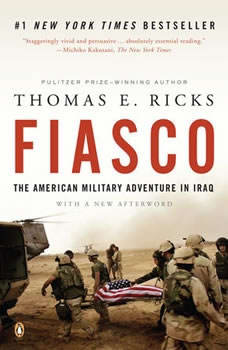 From the Washington Post's two-time Pulitzer-winning senior Pentagon reporter, the definitive military chronicle of the Iraq War-and a searing judgment of its gross strategic blindness-drawing on the accounts of senior military officers giving voice to their anger for the first time.

A riveting, edge-of-your seat account of how a battalion of Marines faced off against the most brutal of Al Qaeda at its most desperate and vicious moment--and how the Marines decisively crushed the terrorists When the 2nd Battalion of the 3...

In The Company of Soldiers
by Rick Atkinson

For soldiers in the 101st Airborne Division, the road to Baghdad began with a midnight flight out of Fort Campbell, Kentucky, in late February 2003. For Rick Atkinson, who would spend nearly two months covering the division for The Washington Post, ...

Eyes on the Horizon
by Malcolm McConnell

General Richard B. Myers has unique insight into how the American national security system works. In Eyes on the Horizon, he recounts his military career and outlines a bold blueprint for a strategic overhaul of our security system, including the mi...

Will They Ever Trust Us Again?
by Michael Moore

American soldiers serve willingly. They risk their lives so the rest of us can be safe. The one small thing they ask is that they not be sent into harm's way unless it is absolutely necessary. But after being lied to about weapons of mass destructio...

Eagerly anticipated in the wake of their national best seller Cobra II (“The superb, must-read military history of the invasion of Iraq”—Thomas L. Friedman), The Endgame is Michael R. Gordon and General Bernard E. Trainor’s m...

This is the story of a small group of soldiers from the 101st Airborne Division's fabled 502nd Infantry Regiment—a unit known as the Black Heart Brigade. Deployed in late 2005 to Iraq's so-called Triangle of Death, a veritable meat grinder jus...

From the Washington Post's two-time Pulitzer-winning senior Pentagon reporter, the definitive military chronicle of the Iraq War-and a searing judgment of its gross strategic blindness-drawing on the accounts of senior military officers giving voice...