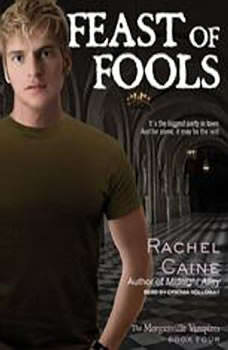 In the college town of Morganville, vampires and humans have learned to live in relative peace. Still, students like Claire Danvers know that after dark, studying can take a backseat to staying alive. But the tenuous good-neighbor policy is really turned on its head with the arrival of Mr. Bishop. Bad to the bone, the ancient old-school vampire cares nothing about harmony. Staying at the top of the food chain isn't enough. What he wants from the town's living and dead is unthinkably sinister. It's only at a formal ball attended by vampires and their human dates that Claire realizes Bishop's plan—and the elaborately evil trap he's set for the warm-blooded souls of Morganville.

A year ago, Cal Thompson was a college freshman more interested in meeting girls and partying than in attending biology class. Now, after a fateful encounter with a mysterious woman named Morgan, biology has become, literally, Cal's life.Cal was inf...

Don't miss Evermore, the first book in Alyson Noel's #1 New York Times bestselling The Immortals series. Enter an enchanting new world where true love never dies. . . After a horrible accident claimed the lives of her family, sixteen-year-old Ever B...

Fade Out
by Rachel Caine

Without the evil vampire Bishop ruling over the town of Morganville, the resident vampires have made major concessions to the human population. With their newfound freedoms, Claire Danvers and her friends are almost starting to feel comfortable agai...

This 4th installment to the Morganville series was a great read. The story picked right up from MA and kept moving. I loved it and the cliffhanger ending, that foreshawdows a big war, has me on pins and needles for the next book in the series.