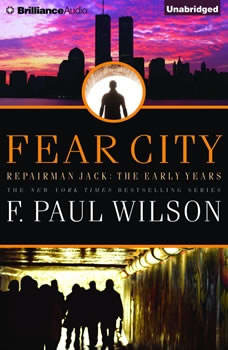 Rage, terror, and redemption: these are the stones upon which F. Paul Wilson builds the concluding chapter of Repairman Jack: The Early Years, the prequel trilogy focusing on the formative years of Wilson's globally popular supernatural tropubleshooter.The strands of Jack's life, established in the first two books, Cold City and Dark City, are now woven into a complete pattern.Centered around an obscure group of malcontents intent on creating a terrible explosion in New York City in 1993, Fear City shows the final stages of young Jack becoming Repairman Jack. It is a dark and terrible story, full of plots and needless mayhem, with secret agents, a freelance torturer, a secret society as old as human history, love, death, and a very bleak triumph. Jack threads his way through this intricate maze, as people he loves are stripped away from him in a way that presages the later epic series of novels.