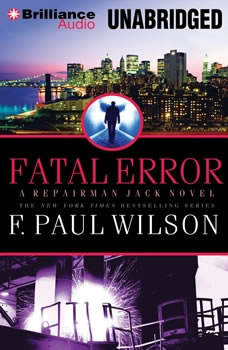 “Ground Zero is not only packed with action and revelations but told so well that fans will want the next two books now…. Wilson’s writing has never been sharper…. It’s truly going to make his fans giddy.” —BookgasmMunir Habib’s life has become a nightmare. His tormentor has warned Munir not to report the kidnapping of his family, or they will pay a terrible price. But a friend realizes something is terribly wrong and tells Munir he doesn’t have to go to the cops. There’s a guy who fixes situations like this—Repairman Jack.Jack is backed into helping Munir despite his ongoing involvement in the cosmic shadow war between the Ally and the Otherness. Or perhaps because of it. He’s chafing at being forced into the defensive role of protecting the Lady, the physical embodiment of the consciousness of the planet Earth.Meanwhile, the Septimus Order and the Kickers are seemingly working in concert on a plot to extinguish the Lady and open the way for the Otherness to take over our reality. To top it off, Dawn Pickering finally goes into labor and delivers a baby she only glimpses as it’s whisked away. She’s terrified by what she sees. Later she’s told the baby died, but she doesn’t believe it. Neither does Weezy Connell. Neither does Jack.All these interlocking plots mean doom for humanity. But Jack never gives up or gives in.“The name is Jack, Repairman Jack, and it’s a name worth looking up next time you want a great supernatural thriller.” —Fangoria