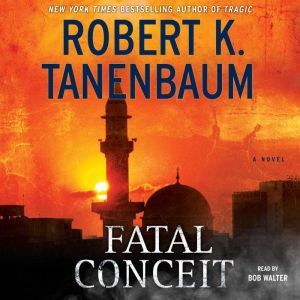 In the twenty-sixth book in the bestselling Butch Karp/Marlene Ciampi series from Robert K. Tanenbaum, Butch Karp finds himself battling a heavyweight opponent -- his own government -- when a decorated American general and the newly appointed Director of counterterrorism, is murdered (allegedly) by a jealous mistress in an elegant NYC boutique hotel. But his death coming a few days before the general was to testify before a congressional committee on a highly controversial Chechnyan Affair, raises suspicion with the police and Karp. It was rumored that the general would deviate from the accepted government version of events, and that they may have had something to do with his death -- to cover up their own mistakes. Thus the stage is set for the exciting thriller Fatal Conceit, which splits into two storylines. One involves Karp's daughter, Lucy, now a polyglot linguist assisting the US ambassador to Russia. They must find the Chechnyan terrorists involved in the affair and expose the government cover-up. Meanwhile, Karp plunges into the underworld of New York City to find the general's mistress and the Russian assassin Nadya Malovo to reach out to the Chechynan terrorists before it's too late. Their paths will come together in a garish courtroom conclusion as Karp battles the full weight of the U.S. administration, a hostile judge, and a compliant media that attempts to portray Karp as politically motivated. Sinister forces try to prevent him from bringing out the truth on the witness stand, even if they have to resort to murder.