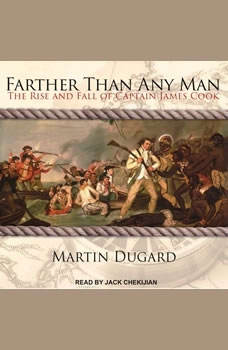 Farther Than Any Man: The Rise and Fall of Captain James Cook

In the annals of seafaring and exploration, there is one name that immediately evokes visions of the open ocean, billowing sails, visiting strange, exotic lands previously uncharted, and civilizations never before encountered—Captain James Cook. This is the true story of a legendary man and explorer. Noted modern-day adventurer Martin Dugard, using James Cook's personal journals, strips away the myths surrounding Cook's life and portrays his tremendous ambition, intellect, and sheer hardheadedness to rise through the ranks of the Royal Navy—and by his courageous exploits become one of the most enduring figures in naval history. Full of realistic action, lush descriptions of places and events, and fascinating historical characters such as King George III and the soon-to-be-notorious Master William Bligh, Dugard's gripping account of the life and death of Captain James Cook is a thrilling story of a discoverer hell-bent on going farther than any man.

THIS GRIPPING AND TRIUMPHANT MEMOIR FOLLOWS A LIVING LEGEND OF EXTREME MOUNTAINEERING AS HE MAKES HIS ASSAULT ON HISTORY, ONE 8,000-METER SUMMIT AT A TIME.For eighteen years Ed Viesturs pursued climbing’s holy grail: to stand atop the world...

A Pacific Northwest Booksellers Association BestsellerIn a firestorm, nothing is safe: sand turns to glass, metal runs like water, wood and human beings vanish into ash.Enter a world of breathtaking danger and beauty: In this remarkable memoir, vet...

“If something is important enough, even if the odds are against you, you should still do it.” (Elon Musk) Do you want to know what made Elon Musk so successful? Learn About The Billionaire Visionary Behind Tesla Motors and Paypal This ...

As war clouds darkened over Europe in 1914, a party led by Sir Ernest Shackleton set out to make the first crossing of the entire Antarctic continent via the Pole. But their initial optimism was short-lived as ice floes closed around their ship, gra...

438 Days is the miraculous account of the man who survived alone and adrift at sea longer than anyone in recorded history—as told to journalist Jonathan Franklin in dozens of exclusive interviews.On November 17, 2012, Salvador Alvarenga left t...

This gripping and triumphant memoir follows a living legend of extreme mountaineering as he makes his assault on history, one 8,000-meter summit at a time.For eighteen years Ed Viesturs pursued climbing’s holy grail: to stand atop the world...

J.H. "Billy" Williams always had an affinity for animals. So, when he responded to a job offer with the East India Company to work with logging elephants his family wasn't surprised, though they were worried. He had already come back from World War ...

Skeletons on the Zahara
by Dean King

A masterpiece of historical adventure, Skeletons on the Zahara chronicles the true story of twelve American sailors who were shipwrecked off the coast of Africa in 1815, captured by desert nomads, sold into slavery, and subjected to a hellish t...