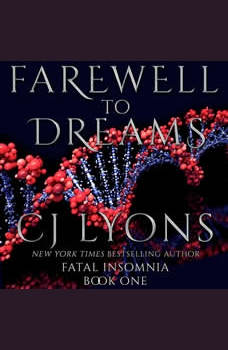 Farewell to Dreams: A Novel of Fatal Insomnia

Without sleep, her life became a living nightmare.

From New York Times bestselling and Thriller Award-winning author CJ Lyons an explosive medical thriller with a dark and edgy twist, “a heroine you'll never forget and a story that whips by at bullet speed" (Tess Gerritsen).

In the chaos of the ER, functioning without sleep is a prized skill. But even Dr. Angela Rossi will admit that five months is far too long. Then a dead nun speaks to her while Angela is holding the nun’s heart in her hand.

“Find the girl,” the nun commands—although no one else in the trauma room can hear, the words drilling directly into Angela’s brain. “Save the girl.”

Aided by a police detective fallen from grace, Angela searches the midnight catacombs beneath the city, facing down a ruthless gang leader and stumbling onto a serial killer’s lair. Her desperate quest to save the girl leads her to the one thing she least expected to find: a last chance for love.

As her symptoms escalate in bizarre and disturbing ways, Angie realizes exactly how serious her illness is. She might be dying, but she’s finally choosing how to live…

FAREWELL TO DREAMS is the first installment in a new series of medical thrillers with a sci-fi twist that features non-stop action, edge-of-your-seat suspense, and a surprise ending you won't see coming.

Every Fifteen Minutes
by Lisa Scottoline

The End of October
by Lawrence Wright