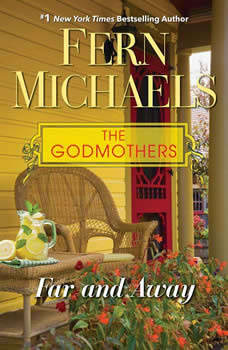 Old friends reunite for an adventure unlike any they’ve faced before in the latest novel by beloved storyteller and #1 New York Times bestselling author Fern Michaels.As Sophie De Luca has learned, many things really are better the second time around, whether that’s a wonderful year of marriage with Goebel, her sweet second husband, or strengthening her bonds with childhood friends Toots, Ida, and Mavis.Yet ever since she and Goebel moved into their new home, Sophie has sensed something a little…unusual. Old houses often contain items left behind from previous owners, but what remains in this case is a painful secret. Facing this past presents a special kind of challenge, but with her three extraordinary friends by her side, Sophie is ready to confront a terrible wrong that occurred within the house decades ago. And, just maybe, each of the lifelong friends will get the chance to claim a sweet, surprising future chiming with wedding bells when the task is done….

Far and Away
Godmothers Series #7