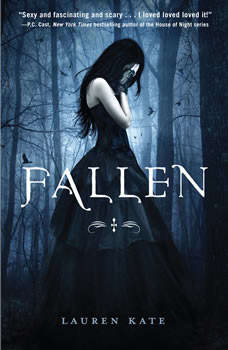 The first book in the worldwide bestselling FALLEN series is now a motion picture available for streaming!

Dangerously exciting and darkly romantic, Fallen by Lauren Kate is a page turning thriller and the ultimate love story.

Mysterious and aloof, he captures Luce Price's attention from the moment she sees him on her first day at the Sword & Cross boarding school in sultry Savannah, Georgia. He's the one bright spot in a place where cell phones are forbidden, the other students are all screw-ups, and security cameras watch every move.

Even though Daniel wants nothing to do with Luce--and goes out of his way to make that very clear--she can't let it go. Drawn to him like a moth to a flame, she has to find out what Daniel is so desperate to keep secret . . . even if it kills her.

Nora Grey is responsible and smart and not inclined to be reckless. Her first mistake was falling for Patch. Patch has made countless mistakes and has a past that could be called anything but harmless. The best thing he ever did was fall for Nora. A...

"The hottest YA title to hit bookstores since The Hunger Games."--Entertainment Weekly This New York Times bestseller is perfect for fans of 1984, Brave New World, Black Mirror, and The Handmaid’s Tale.Cassia has always trusted ...