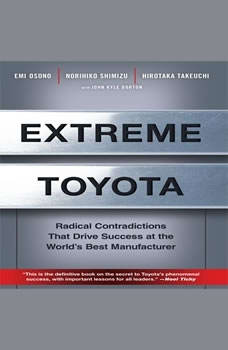 To an outsider, Toyota is hard to understand. The company moves forward gradually while also advancing in big leaps. It is frugal with its resources while spending extravagantly on people and projects. It is both efficient and redundant; it cultivates an environment of stability and paranoia; it is hierarchical and bureaucratic, but encourages dissent; it demands that communication be simplified while building complex communication networks. These contradictions are rampant at Toyota because its culture and managers intentionally embrace contradiction, opposites, and paradox. Granted unprecedented access to the inner workings of Toyota, the authors spent six years researching the company and performing more than 220 interviews with Toyota employees, distributors, and car dealers in order to determine what makes Toyota one of the world's best companies. Extreme Toyota offers an inside look at the radical contradictions within the company, created by its own management, and how these help Toyota outperform its competition. By putting a premium on creativity and paradoxical thinking as a corporate resource, Toyota has become the best car manufacturer and one of the most successful companies on earth. This audiobook takes a fascinating inside look at what makes Toyota tick.