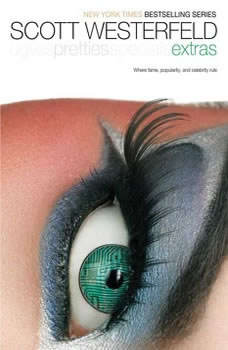 The final installment of Scott Westerfeld’s New York Times bestselling and award-winning Uglies series—a global phenomenon that started the dystopian trend.A few years after rebel Tally Youngblood takes down the Specials regime, a cultural renaissance sweeps the world. “Tech-heads” flaunt their latest gadgets, “kickers” spread gossip and trends, and “surge monkeys” are hooked on extreme plastic surgery. Popularity rules, and everyone craves fame. Fifteen-year-old Aya Fuse is no exception. But Aya’s face rank is so low, she’s a total nobody. An extra. Her only chance at stardom is to kick a wild and unexpected story. Then she stumbles upon a big secret. Aya knows she is on the cusp of celebrity. But the information she is about to disclose will change both her fate…and that of the brave new world.

this book was a great ending to the series. At first, it's a bit odd reading about a new character and there's so much difference between this and the other books,not bad,but interesting.Tally does come into the story eventually and it all goes uphill from there. So,if you've read the other books, no question. You have to rent this book.So..what are you waiting for? :

Extras is just that: extra. I would have been completely satisfied if the series had ended after Specials. Extras moves slowly and the plot does not develop until well into the book. The conflict is unclear and does not feel nearly as threatening as in the first three books. The characters are underdeveloped and uninteresting. The climax is flat, and the ending wraps up too perfectly, with all the loose ends tied up and neatly clipped.If you are happy with how Specials ended, I would skip Extras.