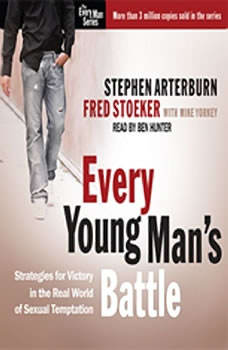 Every Young Man's Battle: Strategies for Victory in the Real World of Sexual Temptation

In this world you're surrounded by sexual images that open the door to temptation. They're everywhere--on TV, billboards, magazines, music, the internet and so easy to access that it sometimes feels impossible to escape their clutches. Yet God expects his children to be sexually pure. So how can you survive the relentless battle against temptation? Here's powerful ammunition.

Steve Arterburn and Fred Stoeker, the authors of the hard-hitting best-seller Every Man's Battle, now focus on the temptations young single Christian men like you face every day and they offer workable, biblical strategies for achieving sexual purity.

The authors examine the standard of Ephesians 5:3--"there must not be even a hint of sexual immorality" in a positive and sensitive light. And they explain how an authentic, vibrant relationship with Jesus Christ is the key to victory over temptation. Every Young Man's Battle will show you how to train your eyes and your mind, how to clean up your thought life, and how to develop a realistic battle plan for remaining pure in today's sexually soaked culture. As a result, you'll experience hope--real hope for living a strong, pure life God's way.

Man up; it’s the best thing you can do for others—and yourselfMen are so busy doing so many different things; when not working, their free time is often full of the trivial or sinful. But what society and church so desperately need ...

Every man was once a boy. And every little boy has dreams, big dreams: dreams of being the hero, of beating the bad guys, of doing daring feats and rescuing the damsel in distress. Every little girl has dreams, too: of being rescued by her prince an...

<P>Author and pastor Craig Groeschel helps you uncover who you really are—a man created with a warrior’s heart in the image of God—and how to fight the good fight for what’s right. You will find the strength to fight t...

“A kingdom man is the kind of man that when his feet hit the floor each morning the devil says, ‘Oh crap, he’s up!’”So begins this powerful volume from Dr. Tony Evans, now in softcover. Tony believes that God wants ever...

The Resolution For Men
by Stephen Kendrick

From the New York Times bestselling authors of The Love Dare comes a strong resolution of faith, family, and fatherhood that sets men on a course toward long-term success — the kind that breaks the chains of your past, earns the loving trust o...

You Can Win Her Back Few challenges in life are as difficult as regaining a wife’s trust—and few are as ultimately worthwhile. Trust can be rebuilt in your marriage! With patient, loving, self-sacrificing effort, it’s possible t...

Disciplines of a Godly Man
by R. Kent Hughes

Disciplines Of A Godly Man has been speaking to the hearts of men for the past 10 years, and it continues to be timeless in its message. Using engaging illustrations, scriptural wisdom, practical suggestions and study questions, Kent Hughes offers a...

Play the man. Make the man. Somewhere along the way, our culture lost its definition of manhood, leaving generations of men and men-to-be confused about their roles, responsibilities, relationships, and the reason God made them men. It&#39;s int...

The challenge every man faces...the fight every man can win!From movies and television, to print media and the Internet, men are constantly faced with the assault of sensual images. It is impossible to avoid such temptations... but, thankfully, not ...