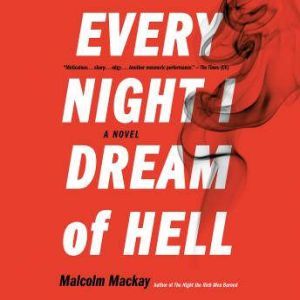 Every Night I Dream of Hell

"Don't pick up a Mackay book unless you've got spare time. They're habit-forming." --New York Times From the award-winning author of The Glasgow Trilogy comes Every Night I Dream of Hell, a dark and thrilling Glaswegian crime drama.Nate Colgan would be the first to admit that his violent reputation makes him very good at his job--and bad at everything else. After eighteen years spent working on the sidelines of Glasgow's criminal underworld, there's no question he'll accept the central position that Peter Jamieson's organization offers him, despite his better judgment. The organization isn't as strong as it once was: its most powerful members are either dead or behind bars, including Jamieson himself, and the time is ripe for change.Chang begins with an execution--a message for Jamieson's supporters--which promptly sets the various factions within the organization against one another. Colgan's position as "security consultant" means his duty is clear: idneitfy the killer and find out who's willing to seize power, even if it means igniting a war. Meanwhile, on the other side of the law, DI Michael Fisher conduscts his own investigation into the murder. Both men can't help but wonder: Why do these events coincide with the return of Zara Cope, the mother of Colgan's child, a disreputable woman with an uncanny ability to attract trouble and troublemakers?A dark and thrilling crime drama, Every Night I Dream of Hell takes us deep into a world of violence, fear and double-crosses.