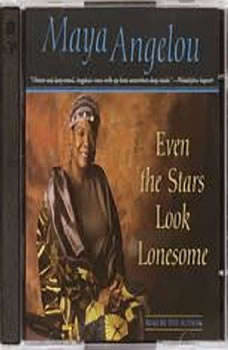 Even the Stars Look Lonesome

This wise book is the wonderful continuation of the bestselling Wouldn't Take Nothing for My Journey Now.

Even the Stars Look Lonesome is Maya Angelou talking of the things she cares about most. In her unique, spellbinding way, she re-creates intimate personal experiences and gives us her wisdom on a wide variety of subjects. She tells us how a house can both hurt its occupants and heal them. She talks about Africa. She gives us a profile of Oprah. She enlightens us about age and sexuality. She confesses to the problems fame brings and shares with us the indelible lessons she has learned about rage and violence. And she sings the praises of sensuality.

Even the Stars Look Lonesome imparts the lessons of a lifetime.

What does it mean to be a leader? In the history of leadership in America, no one has galvanized a time, place, and people more forcefully than Martin Luther King, Jr. A man who articulated a vision, crafted a strategy, and took defeats and turned ...

The culmination of a unique achievement in modern American literature: the six volumes of autobiography that began more than thirty years ago with the appearance of I Know Why the Caged Bird Sings. A Song Flung Up to Heaven opens as Maya Angelou r...

In The New Negro: The Life of Alain Locke, Jeffrey C. Stewart offers the definitive biography of the father of the Harlem Renaissance, based on the extant primary sources of his life and on interviews with those who knew him personally. He narrates ...

Celebrated for her courageous exploits as a conductor on the Underground Railroad, Harriet Tubman has entered history as one of nineteenth-century America's most enduring and important figures. But just who was this remarkable woman? To John Brown,...

“Dapper Dan is a legend, an icon, a beacon of inspiration to many in the Black community. His story isn’t just about fashion. It’s about tenacity, curiosity, artistry, hustle, love, and a singular determination to live our dre...

Oprah's Book Club Summer 2018 SelectionA powerful, revealing story of hope, love, justice, and the power of reading by a man who spent thirty years on death row for a crime he didn't commit.“An amazing and heartwarming story, it restores our f...