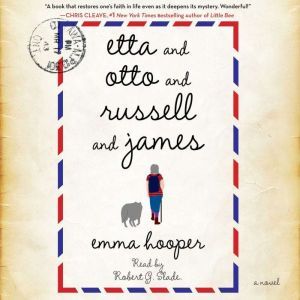 Etta and Otto and Russell and James

A gorgeous literary debut about an elderly woman’s last great adventure walking across Canada. A beautiful novel of pilgrimage, of fulfilling lifelong promises, of a talking coyote called James, of unlikely heroes and hundreds of papier-mâché animals…Eighty-two-year-old Etta has never seen the ocean. So early one morning she takes a rifle, some chocolate, and her best boots, and begins walking the 3,232 kilometers from rural Canada eastward to the coast. Her husband Otto wakes to a note left on the kitchen table. I will try to remember to come back, Etta writes to him. Otto has seen the ocean, having crossed the Atlantic years ago to fight in a far-away war. He understands. But with Etta gone, the memories come crowding in and Otto struggles to keep them at bay. Russell has spent his whole life trying to keep up with Otto and loving Etta from afar. Russell insists on finding Etta, wherever she’s gone. Leaving his own farm will be the first act of defiance in his life. As Etta walks further toward the ocean, accompanied by a coyote named James, the lines among memory, illusion, and reality blur. Rocking back and forth with the pull of the waves, Etta and Otto and Russell and James moves from the hot and dry present of a quiet Canadian farm to a dusty burnt past of hunger, war, passion, and hope; from trying to remember to trying to forget; and inspires each of its characters to visit the sites they’ve longed to see and say the things they’ve longed to say. This is dazzling literary fiction about the rediscovery and care of the soul, and the idea it’s never too late for a great adventure.