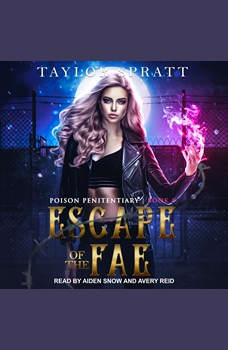 Escape of the Fae

A thousand prisoners against one? Bring it on . . . The name's Jesy Gilchrest and I'm nobody's fairy princess. I'm a cage fighter, pack leader, and all around bad-ass Alpha Fae. They say I've got a little impulse control problem and they're right about that. I robbed the Vampire King's castle and it got me thrown into Poison Penitentiary, home of the most blood-thirsty creatures in the Magical Sect. A dark secret haunts this place, clinging to the air like a disease and in here, everything goes bump in the night. I'm not worried though. Because I may be crazy, but I'm not stupid. I got caught for a reason. They've got my younger brother locked up in here. He's innocent and I'll stop at nothing till he's freed. There's just one problem with my brilliant break-out plan. Remember that little impulse control issue I mentioned earlier? I got in a fight with the warden on the first day and now she's promised freedom to any prisoner who can finish me off. Four of the prison's deadliest inmates step in to help me. A werewolf, dragon shifter, vampire, and demon. What do they want in exchange? Let's just say they've got a taste for Alpha Fae. A big one. Contains mature themes.