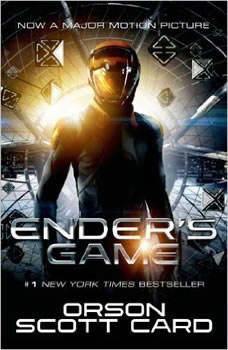 Winner of the Hugo and Nebula AwardsIn order to develop a secure defense against a hostile alien race's next attack, government agencies breed child geniuses and train them as soldiers. A brilliant young boy, Andrew "Ender" Wiggin lives with his kind but distant parents, his sadistic brother Peter, and the person he loves more than anyone else, his sister Valentine. Peter and Valentine were candidates for the soldier-training program but didn't make the cut—young Ender is the Wiggin drafted to the orbiting Battle School for rigorous military training.Ender's skills make him a leader in school and respected in the Battle Room, where children play at mock battles in zero gravity. Yet growing up in an artificial community of young soldiers Ender suffers greatly from isolation, rivalry from his peers, pressure from the adult teachers, and an unsettling fear of the alien invaders. His psychological battles include loneliness, fear that he is becoming like the cruel brother he remembers, and fanning the flames of devotion to his beloved sister. Is Ender the general Earth needs? But Ender is not the only result of the genetic experiments. The war with the Buggers has been raging for a hundred years, and the quest for the perfect general has been underway for almost as long. Ender's two older siblings are every bit as unusual as he is, but in very different ways. Between the three of them lie the abilities to remake a world. If, that is, the world survives.Ender's Game is the winner of the 1985 Nebula Award for Best Novel and the 1986 Hugo Award for Best Novel.

Children of the Mind
by Orson Scott Card

I thought it a good yarn, but spent most of the time waiting for some relief from the heaviness- wouldn't recommend it for people who like fun fantasy- definitely sci -fi, not fantasy catagory. well thought out, interesting story, but i like to enjoy the world i read about-this is not a world i would care to be in.

I have been meaning to read this book for while now. It is a sci-fi classic, and rightly so. The story is about a young boy named Ender who at the age of six is taken away from his parents willingly and goes off to the equivalent of military school. The commanders of the military think Ender could turn into a military genius and they try to groom him as such. Ender learns how to strategize and command and even through the book, while not even the age of 11, the lives and hopes of the entire human race depend on him. The book was very engrossing. I had trouble putting it down.