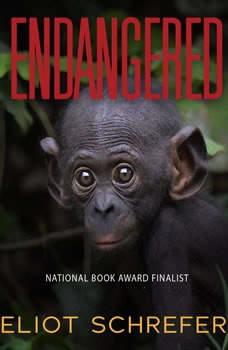 When Sophie has to visit her mother at her sanctuary for bonobos, she's not thrilled to be there. Then Otto, an infant bonobo, comes into her life, and for the first time she feels responsible for another creature. But peace does not last long for Sophie and Otto. When an armed revolution breaks out in the country, the sanctuary is attacked, and the two of them must escape unprepared into the jungle. Caught in the crosshairs of a lethal conflict, they must struggle to keep safe. In Endangered, Eliot Schrefer plunges us into a heart-stopping exploration of the things we do to survive, the sacrifices we make to help others, and the tangled geography that ties us all, human and animal, together.

From her first moment at Merryweather High, Melinda Sordino knows she's an outcast. She busted an end-of-summer party by calling the cops — a major infraction in high-school society — so her old friends won't talk to her, and people she ...

They Both Die at the End
by Adam Silvera

Adam Silvera reminds us that there’s no life without death and no love without loss in this devastating yet uplifting story about two people whose lives change over the course of one unforgettable day.New York Times bestseller * 4 starre...

With this stunning debut novel, New York Times bestselling author Lauren Oliver emerged as one of today's foremost authors of young adult fiction. Like Jay Asher's Thirteen Reasons Why and Gayle Forman's If I Stay, Before I Fall raises thought-prov...

Everything, Everything
by Nicola Yoon

The instant #1 New York Times bestseller--now a major motion picture starring Amandla Stenberg as Maddy and Nick Robinson as Olly.  Risk everything . . . for love.What if you couldn’t touch anything in the outside world? Never b...

Turtles All the Way Down
by John Green

“Wrenching and revelatory.” An instant #1 bestseller, the widely acclaimed Turtles All the Way Down is John Green's brilliant and shattering new novel.“A tender story about learning to cope when the world feels out of con...

Soon to be a Netflix film—featuring Jennifer Aniston, Danielle Macdonald, and Dove Cameron, as well as a soundtrack from Dolly Parton!The #1 New York Times bestseller and feel-good YA of the year—about Willowdean Dixon, the fearless, fu...

Soon to be a major motion picture starring Yara Shahidi and Charles Melton! The #1 New York Times bestseller and National Book Award Finalist from the bestselling author of Everything, Everything will have you falling in love with Natasha and D...

The Fault in Our Stars meets Eleanor and Park in this exhilarating and heart-wrenching love story about a girl who learns to live from a boy who intends to die.Soon to be a major motion picture starring Elle Fanning! Theodore Finch is fasc...