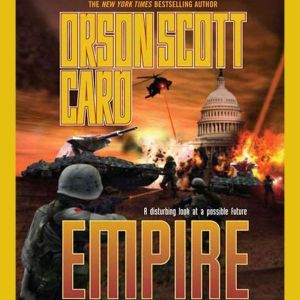 The American Empire has grown too fast, and the fault lines at home are stressed to the breaking point. The war of words between Right and Left has collapsed into a shooting war, though most people just want to be left alone. The battle rages between the high-technology weapons on one side, and militia foot-soldiers on the other, devastating the cities, and overrunning the countryside. But the vast majority, who only want the killing to stop and the nation to return to more peaceful days, have technology, weapons and strategic geniuses of their own. When the American dream shatters into violence, who can hold the people and the government together? And which side will you be on?Orson Scott Card is a master storyteller, who has earned millions of fans and reams of praise for his previous science fiction and fantasy novels. Now he steps a little closer to the present day with this chilling look at a near future scenario of a new American Civil War.

I greatly enjoyed this book, it’s one of the bested books I’ve heard in years. The landscapes depiction in this novel, are a real possibility and should be taken to heart. Like I said before, this book is a must read!!!!!! Happy reading friends

But if you do know how good Orson Scott Card can be, you'll wonder where the editor was when Card submitted this totally unbelievable manuscript. It might be possible to write a credible story where a new American Civil War seemed at least imaginable, but Card doesn't even try and you find yourself saying 'Come on! Am I really supposed to swallow that?' within the first third of the story - and it goes down hill from there. How could anyone have given this 4 stars?